Page 61 of 72
by prospero
Hi Trinitron. I have given the skelly model a quick look in max and I can't spot anything obviously wrong. I'll have a closer look later.
Have you got a .max file version before autobuild?
by Trinitron
Hi Prospero.

Yes I sent you .max file before AutoWork.

btw. I found a tut by tptpt on site Big Truck, where he describes how to manually register yourself for your character Blade (not even AutoWork and Create Nodes, it's all you're doing by hand). It looks terribly complicated.[:0]

http://blade-of-darkness.bigtruck-canad ... /Page1.htm
by prospero
Yes, this was the method before TP automated it. There is an add-on tool called the 'Chilliskinner which is meant as an aid to complicated texuring. Basically, it makes a copy of the object, then detaches all the polygons and lays them flat. This allows you to take a snapshot of the object all flattened out. Easier to fit the 2D bitmap. Then, using the copy as a guide, it puts it all together again. But I think TP adapted some of the code from this tool so to disassemble/assemble parts. This has to be done to avoid scale problems.
(Don't ask me why.[8)])
by Trinitron
Hi Prospero.

Thank you for opening the curtain, which for me was a certain mystery.[;)] Either way, this plugin can be useful in the future, because it's very difficult to give training to the character Blade. Either way there are different difficulty (particularly so where to attach one or another part of the body before AutoWork, I think that if one part of the body attached to the other wrong, then the model will not work.[:(!])
by prospero
I'll see what I can do with the skel later. The models with skirts/robes are tricky becuse if the robe is attached to the pelvis it remains rigid
and the legs can go though it while running. You can however chop the robe up and link the parts to the nearest leg part so it mves more naturally. Works up to a point.
by Trinitron
Hi Prospero.

Thank you and please, if you're able to run model without errors in the game, just say me on my mistakes, but don't send me a ready-made model, I would like to try to resolve the specified error on my own.[:I]

Yes, thanks. I remember your screen, where the Lady walks and at this point raised her skirt with his legs.[:D] I don't know how to do it, but now I've some idea.

by prospero
Will do.

I also tried long-haired girls by chopping sections of the hair off and attaching to the back so that it drapes more naturally. The key when doing this type of thing is to weld all the vertexes in the skin group after autobuild. Then the polygons will deform with movement and you don't get gaps.
by prospero
Hi Trinitron.

I have done the skel, but not tested in game yet. It is quite a complex model, so this made be why the game crashes.

btw. Where are the textures in NWN explorer?
by Trinitron
Hi Prospero.

I don't quite understand the question about the NWN Explorer? I got this model and texture to her from the hak file. For her, I didn't use the NWN Explorer, I immediately opened it in Photoshop.

Or what did you mean? I've had any errors in comparison with you? Or you may send it to me, I'll check in the game. I'm really alot don't understand. I'm creating a model, they're difficult, but I've some problem, or didn't get AutoWork (although all the parts in place), or crash game.
by prospero
No problems. Just wanted the textures. I can run without them but it would be nicer with.

I have spilt the robe into four parts which attach to the legs.
by Trinitron
OK. I sent you TGA and BMP files.[8)]

How can I part of the body divided into several parts, such as robe?
by prospero
If you are in sub-object selection mode(like when you deleted the vertexes in the Create Nodes part), you can select 'Face' rather than 'Vertex.' Select the faces you want to detach and scroll down on the right side panel and click 'Detach'. The selected faces are detached as a new object.
by Trinitron
Woooow![:D] It's still not that difficult, but it really helps.[:p][|)]

Thanks you Prospero.
by Trinitron
I made new character - Gremlin.[:D]

I think that Blade new characters can be numerous.[8D]

Year 2 back you said you started to do animation for Blade: 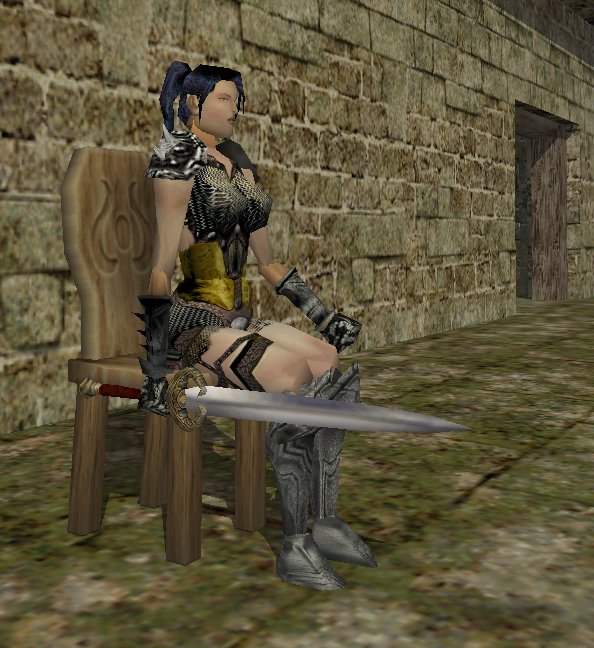 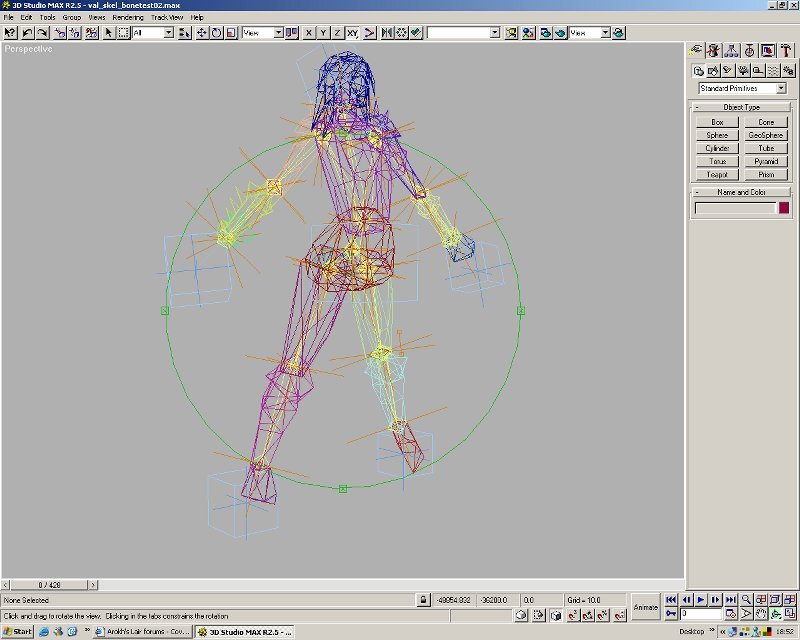 You've all this time there were some successes? Animation seated character is very necessary thing for the Blade, if a mod used alot of NPC and dialogues.
by prospero
The actual process of making animations is fairly simple. The hard part is doing natural movement. The sitting one is static. Making a getting up/down one and making it look good would be more difficult. I have made a couple of death animations which are in mods, but they are for non-human types so you don't notice the awkwardness quite so much.

If you want to play around with anims, Take the finished model file and make a copy. Ungroup, and delete the Skin group. Ungroup the remaining Skeleton group. Delete all the Edges and Anchors. Then keep this file to make copies from for each animation you want to make.
Rename each copy you make.

Click Animate button near the bottom. Then you set Keyframes by using the slider at the bottom. It will say something like 1/100. That's frame 1 of 100 frames. (You can reconfigure by clicking the Reconfigure Time button hear the bottom right.) As you drag the slider across, the frames will count. Slide to 10. Select part of the model. The parts are linked in a hierachy from the centre, so if you move a thigh, the rest of the leg will follow, but not the pelvis. Move the pelvis and both legs will follow..... Move the centre and the whole model will move. Anyhow set a pose, drag the slider, set anyonother stage in the movement, darg the slider and keep doing this until you get to the last frame. Then click the Play Animation > button and see what you have got. [:D] To use the animation, group the whole model as:

and export by picking Blade Animation File [*.BMV]
All times are UTC
Page 61 of 72