http://youtu.be/QveGjWHObZE A bit long and crappy compression quality. But you'll get a glimpse of it. It looks thousand times better ingame. Make sure to choose the 720p version.

Getting closer to wrap it up. I had to remove texture based glows from Blade to increase performance. Blood is out too.
It's hard to loose those two things. Specially the glow on the weapon when is lit for this particular mod. It just doesn't look that good without it. so I'm giving it a last attempt at fixing it somehow. Maybe geo auras like in the combos?
we'll see.

Where is a good place to host this mod thing when it's done? Suggestions?

You can register an unused key to execute any function. It's a bit tricky though as you will need to put the same code in each map's DefFuncs.py. I've found that to get this to work reliably you need to put the key assignment code in a function and used a AddScheduledFunc command to call this function with a slight delay. Couple of seconds should do it.

Rather than put lights on all the weapons you could link a light to the Player (just above head) and switch it on and off with the key. You get a sort of night-vision. make sure you make the light Visible=0 and CastShadows=0
My BOD site: http://www.petrbnsfineart.com/bladestuf ... stuff.html
Top

Tomash, thanks for the link. The site was a bit slow but it definitely looks like the place to go for BOD mods.

Prospero,
I'm leaning against editing scrips for every map. My intention is for this mod to run on top of BOD as a visual update. I would like for it to work with custom maps like your famous Fugitive series. Like a layer on top of the game independent of other mods you may be running.
My mod is working right now, but I had to modify actions.py to add two or three lines of code to hook to my own weaponlight.py script. My fear is that others mods that edit actions.py file will introduce incompatibilities.
I tried the approach that the cheats use, adding the hook to my script in meny.py. So it gets executed when you press F1. The problem is that you also have to switch the lights on or off while you are inside the F1 menu and then hit F1 again to go back to the game and send the command. It completely breaks the flow of the action.

I've seen mods like swords&more with a bunch of custom keystroke bindings to execute commands no matter what or where. I guess I'll dig into them to see how they do it.

I also in desperate need to fins some info about how to pack things to work on BODloader. I haven't found much info about it.


Rather than put lights on all the weapons you could link a light to the Player (just above head) and switch it on and off with the key. You get a sort of night-vision. make sure you make the light Visible=0 and CastShadows=0

That sounds interesting. I didn't know you could link a light ABOVE something. I though it always linked to the center of the link target. Do you have a code example about how to do it? And why CastShadows off?

On a separate note I'm almost done with the visual part. I'm wrestling with an edge detection shader to increase texture definition. It will make textures look sot of HD by adding procedural detail. It makes them look a bit painterly but I like that. The images below are pretty close to final. 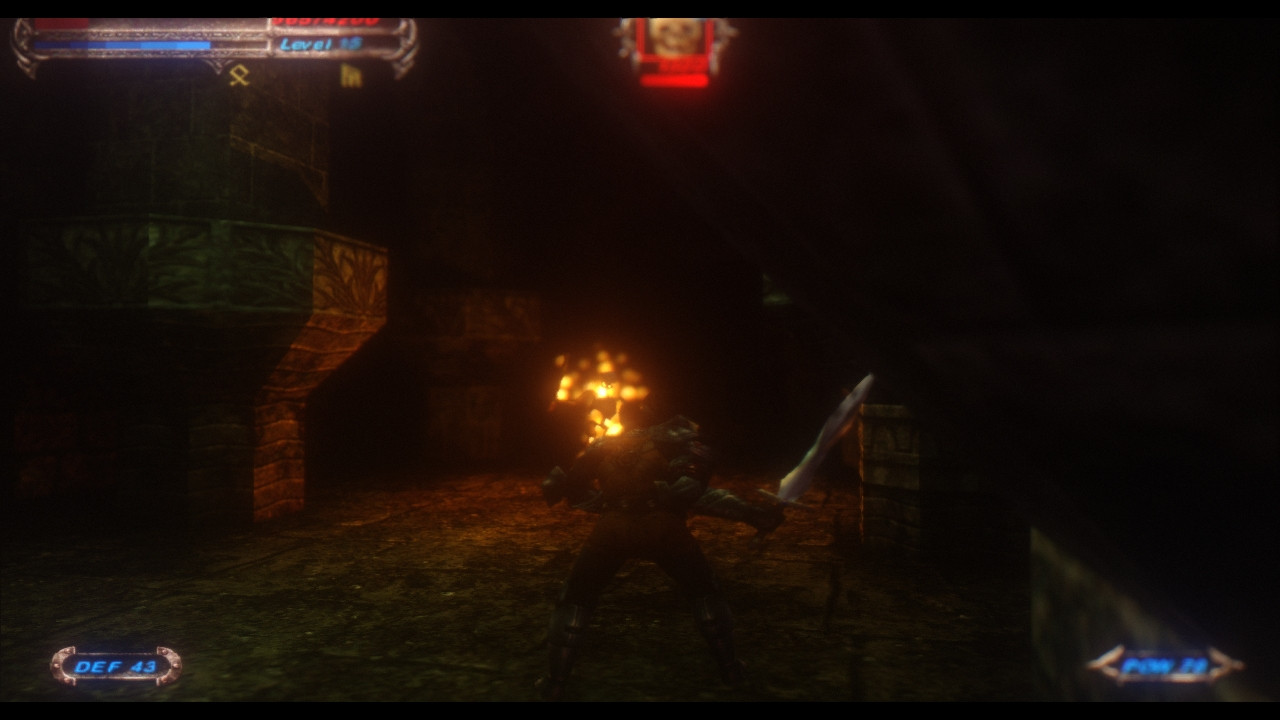 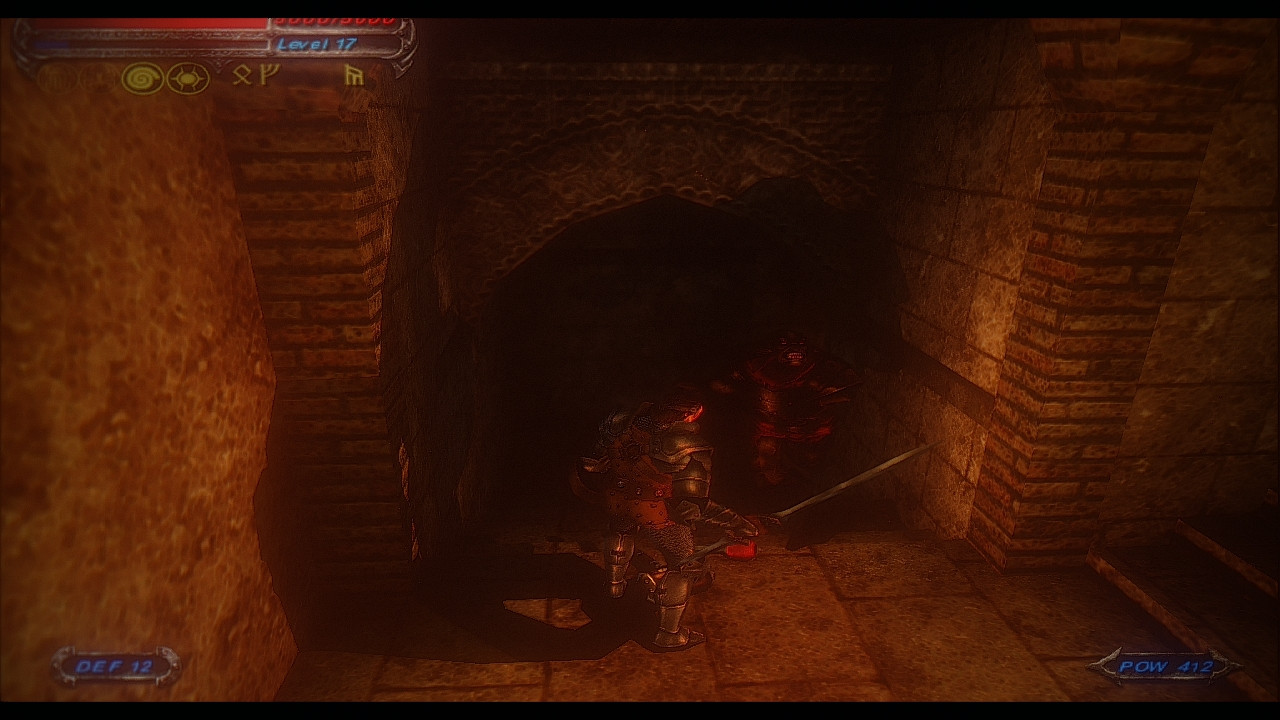 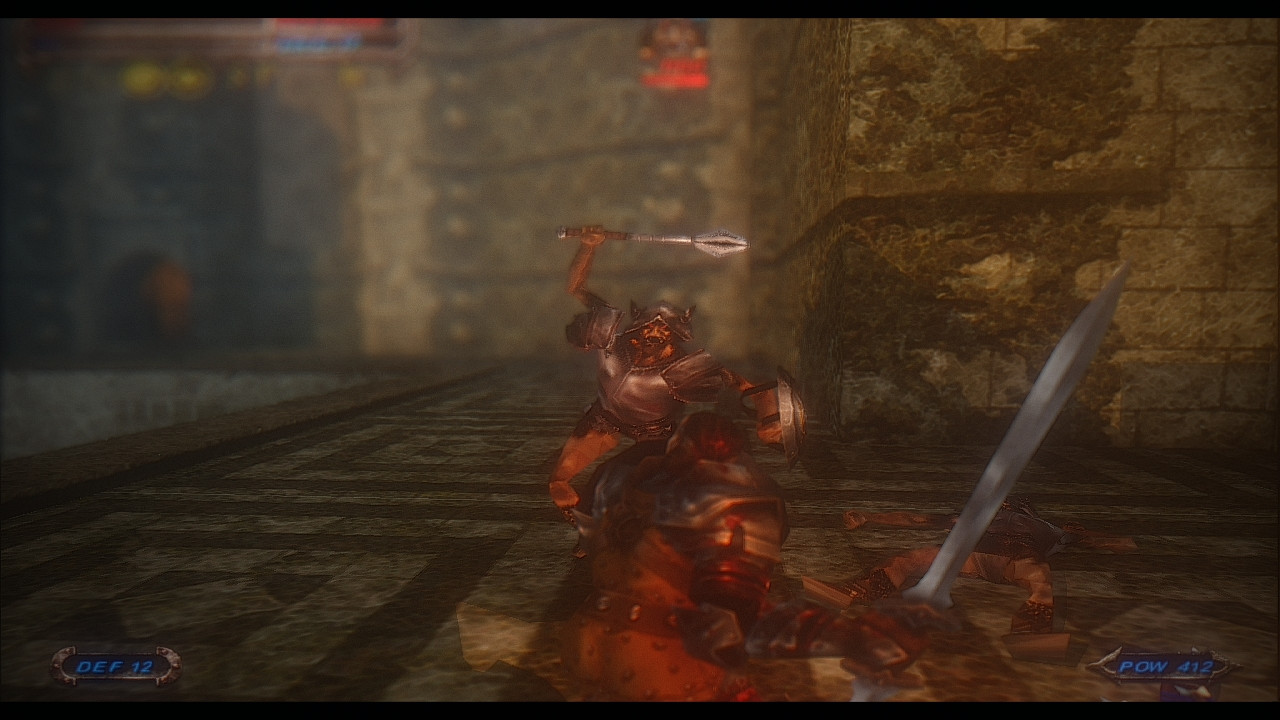 Awesome, I love the pictures!

I have an old computer. The mod works on windows XP? Then with the mod, the game requires more memory and better graphics cards?
Great-great work!

This is looking awesome mate, especially the dof effects. Anything you can do regarding better looking textures is always welcome. By the way have you tried any of the texture mods out there? I did one for Fortes of Nemrut a while back on MODDB.

Anyway i think as long as you can keep performance at an acceptable level the more visual enhancements the better. It's all smoking mirrors really, but as long as we can be tricked into believing the world is real then that's all that matters. Hopefully the dof can eliminate some of the distance and close up blocky models and low res textures too. It's a pity about the blood but the glowing weapons did look awesome. Walking into a dark room with only the glowing weapon and a small glow from a torch on the wall really added to the immersion.

Ok keep up the good work because this has seriously made my new year.

The youtube video has been captured at 1280x720 on a geforce460M.
Pretty much playable (over 30fps) at that resolution with that card. Still ironing out some performance issues in a few spots, but that will give you a reference to how it performs right now. It should work on winXP with a dx9 card.
You can also disable various options like DOF or Ambient occlusion or lens flares until runs in your machine.

I'm trying to use the fastest possible implementation of the main effects so I can leave them all on.
Top

I tried some HD texture mods, but they crashed the game. Probably the engine coudn't handle them.
I'll definitely try your HD map when I'm done with this. I'll like to see how it looks on real HD textures.
What I'm trying to do is to add filters to the final image that give the impression of extra detail and sharpness to the original textures.
Top

piltrafus wrote:I tried some HD texture mods, but they crashed the game. Probably the engine coudn't handle them.
I'll definitely try your HD map when I'm done with this. I'll like to see how it looks on real HD textures.

About the textures, I made a texture pack months ago, changing the original textures. The size and resolution are equal to the original, but I tried to make them a look of shadows.
Well, could you download the texture pack and test them in your mod? Thank you!

I'll make another improved version of my texture pack.

After playing around with a few texture packs i've come to the conclusion that r3dfx doesn't like them one bit. It will crash most of the time displaying an out of memory error. This is the case with or without enb activated.

It's a real pity that this enb doesn't work with d3d as it's better looking and faster. The performance with r3dfx isn't great and on some levels it's really bad.

Still looking forward to this though, even just playing through some random levels reminds me why this game is so good.

Also just found this on the Zeus forums...

"Next nGlide version will be significantly faster with this game."

Hopefully this comes out sooner than later...

I've been back and forth trying new shaders to improve textures but sadly the lack of any sort of texture filtering (no mipmap) from the original glide raster makes the textures flicker more if they are heavily processed and sharpened in post. I'll keep there a bit of processing but nothing major.
I'll leave the texture processing for a new version if there's ever a fix for the missing mipmap filtering.
I increased the flaring of lightsources to make the lighting even more of a presence. I hope you guys like lensflares

I'll release the mod version 01 pretty soon. Visuals are 95% there. Still testing some performance drops in my machine. Tested it in a desktop with a geforce 260 and the FPS stays above 30 consistently.
Some WIP images to get by. 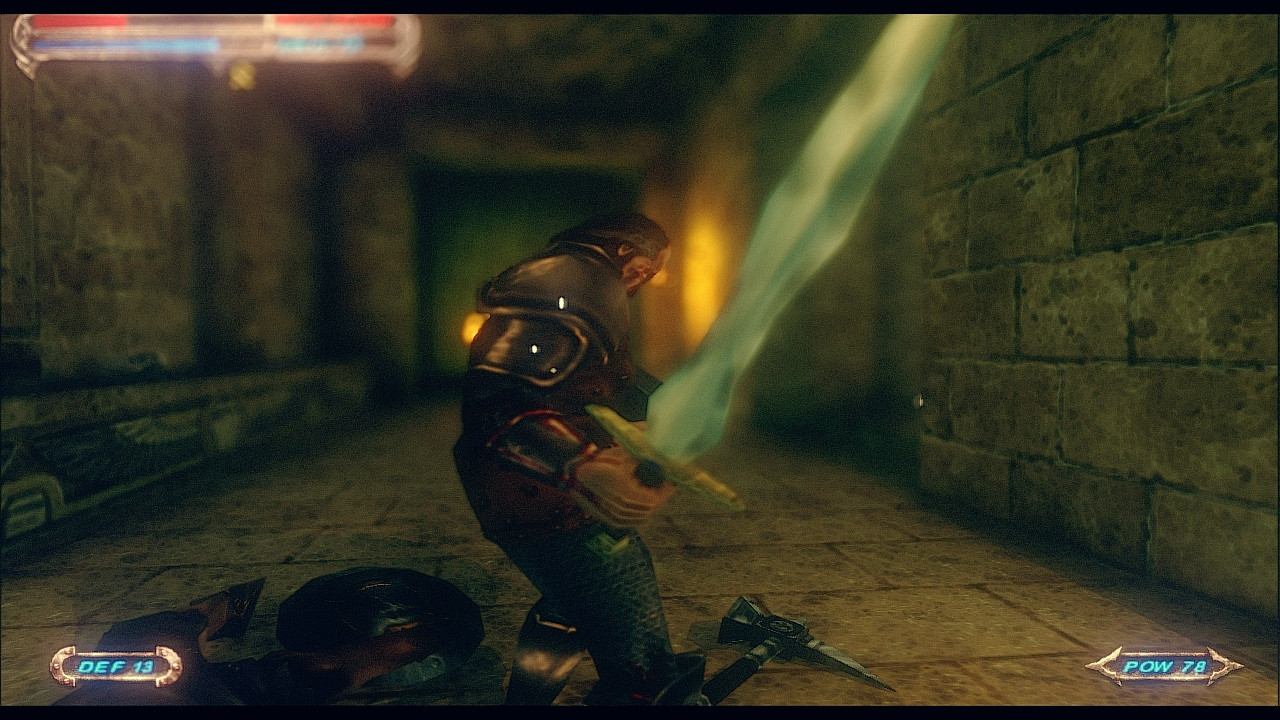 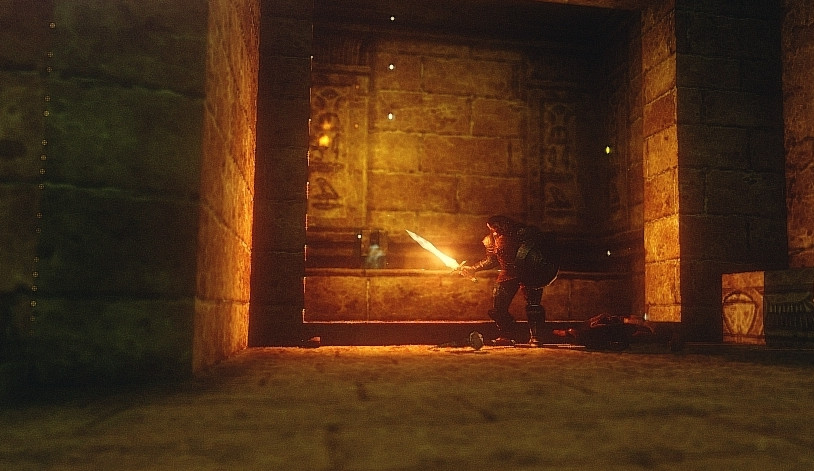 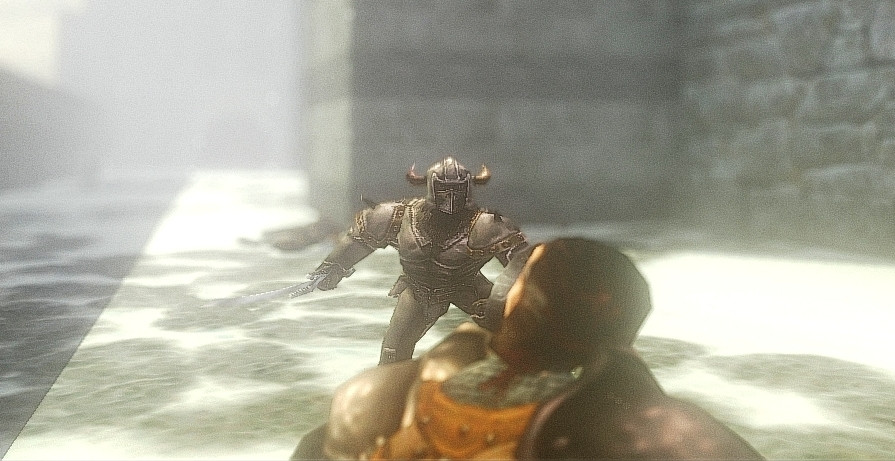 Once you've released it i'll try and get some new textures working with glide. Hopefully this might replace the lack of mipmapping. Just out of curiosity, have you played around with texture filtering options in the nvidia control panel? It might not relate to this at all but a couple of settings can reduce shimmering textures and so fourth.

Yes, I agree with you, sfb.

The graphical upgrade is really great.

It only remains a higher resolution textures, to have the look of an actual game... if it is possible, of course.

I love the pictures, piltrafus, continue your good work!

Hi guys, thanks for showing interest.
The problem with texture filtering is that mipmaming was not included by RebelActStudios in the Glide plugin they released with the game. Maybe glide 2 cards didn't support it? who knows. The other plugins have it (d3d, opengl, voodoo3...) so textures look smooth on those.
We have to use BOD glide render because in combination with Nglide it brings the dx7 engine into dx9, which is what ENB (the post-process engine) uses. So there's no escape from that limitation for now.
The nvidia drivers can't help with texture filtering or even antialiasing. Thankfully ENB has its own antialiasing and works very well.
Also for all I know adding bigger textures without mipmapping could make the flicker even worse.
The best way to alleviate the problem for now is by increasing the render resolution. SO if you have a good machine that can run this at full HD it won't be too bad.

The main thing I need help with is with registering a command to a keystroke in Blade that it executes everytime the game starts. I don't want to edit anything per at map level.
Just want to find a way to start the game, load a map/save, and then just have a key assigned to turn the weapon light on or off.
Anybody knows how?
Top
Post Reply
121 posts