by Frostbite
Thats a fine Dragon rider! Im so pumped for this game, if this is coming for launch then this will be my first ps3 game.

by Arokhs Twin
What's the game called?
by Frostbite
Its called Lair, developed by Sony.
by Arokhs Twin
Thanks, Ill check that out
by Outlaw Wyvern
Yeah, it looks great. I also have the 'Eragon' game by Vivendi on my radar.
Excellent post, Frostbite.
by Frostbite 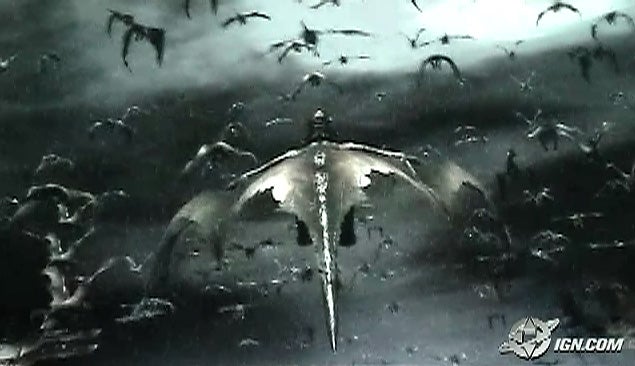 Heres one more pic guys,you can see the rider and the dragon from behind, the developer Factor 5 have always been working in star wars Rogue Squadron project, im just hoping for an adventure that resembles Drakan.
by [email protected]
when is this lair coming out, and where could you buy it?
by Arokhs Twin
I think it was going to be a PS3 launch title but its been pushed back so I'd expect to see it early 2007. Release date on most sites still say TBA at the moment.
by [email protected]
thanks, arokhs twin![:D]
by Frostbite
The gameplay mechanics will consist of ,firstly bring your Dragon as close as to the other dragon.

And then jump onto enemy dragons while being attached to the rope.

Take out the enemy riders.

In addition,you can also do battle on the ground.

by Arokhs Twin
The eragon game for the PS2,Xbox,Xbox360 & PC looks very similar to Drakan. There is a German demo out now for the PC with presumably an English version to follow this week.
by Tom
This games look nice indeed, anyway I hope their will be a new drakan on the ps3 soon, I bought a ps2 because I needed it for dragon and if there will be a drakan 3, I will buy a ps3 for it

Surreal hasn't announced anything 10-19-05 so i'll think that means theirs working on a new game. Hopefully it's another drakan.
by Arokhs Twin
Welcome to the forum!
Sorry to be a bit of a killjoy but there is a very slim chance that another drakan will be made. This is because Surreal has been bought by Midway games as an exclusive in house developer and Sony who published Drakan own the rights to the game. The only chance of another game being made is if Sony got another developer to make the game for them which again is doubtful given the low sales of the game.
by Tom
Hmm, to bad.....lucky there still is a small chanche

But for the low sales part, they can work on that.
Most people just love the game once they have played it, but a lot of people have never heard of it, so they should have advertised more.
(At least in the Netherlands)
All times are UTC+01:00
Page 1 of 1