Blade Of Light mod. Enhanced gameplay where lighting plays a part in the strategy. Use the light bearing blades to slice your way into the heart of the Darkness. Cast a light on your weapon (or any object you are carrying) to help you explore and fight in the dark. 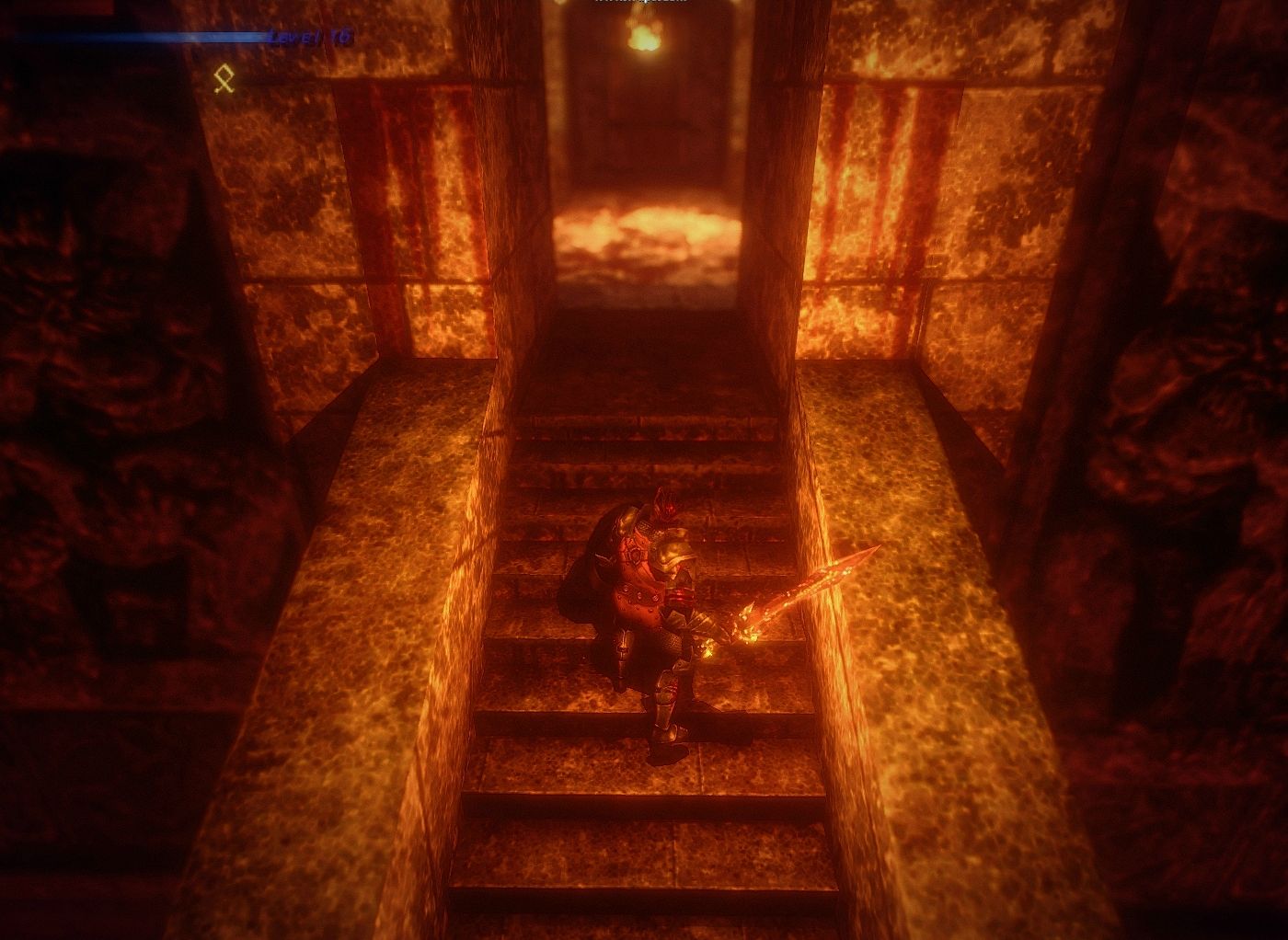 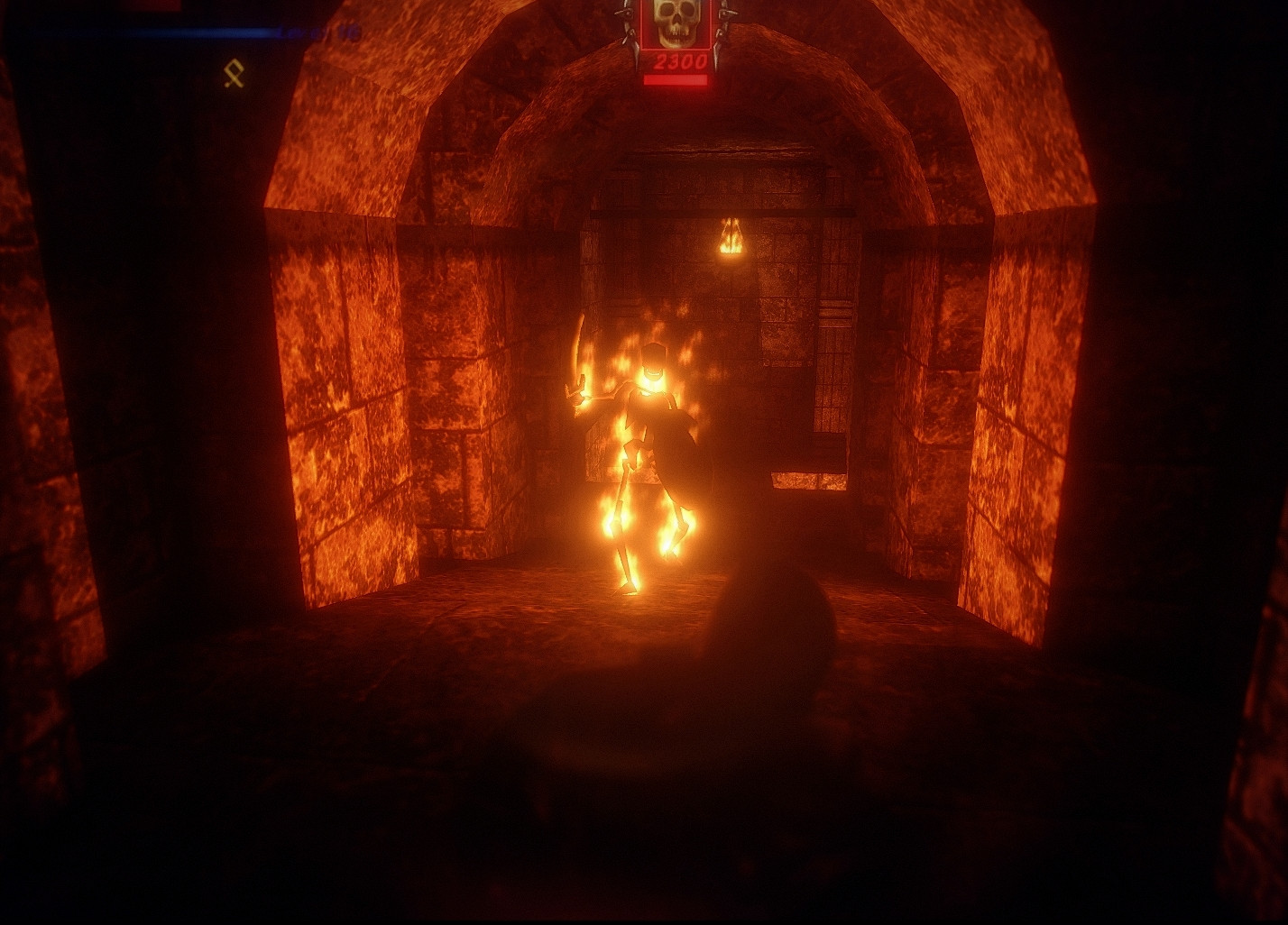 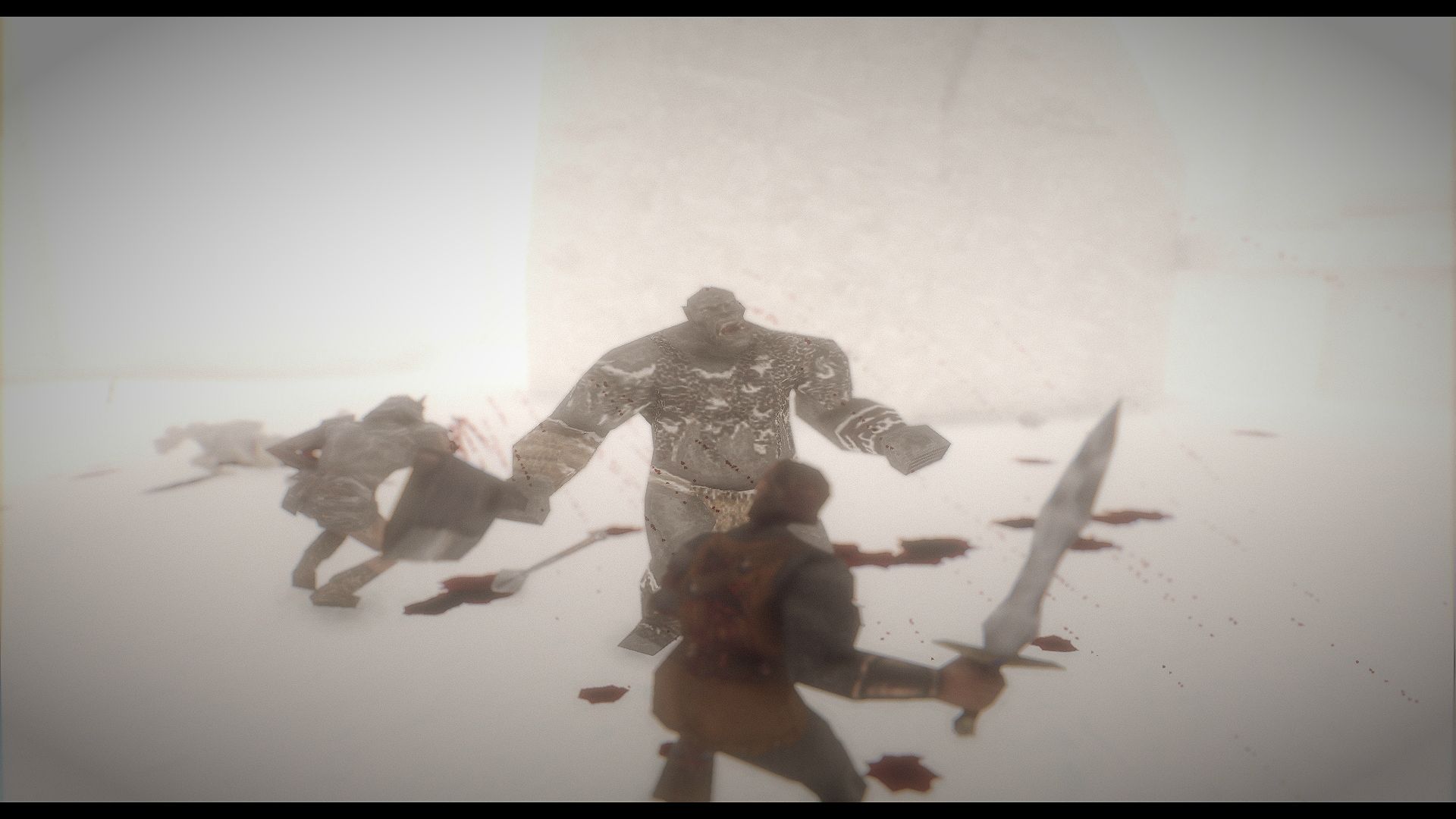 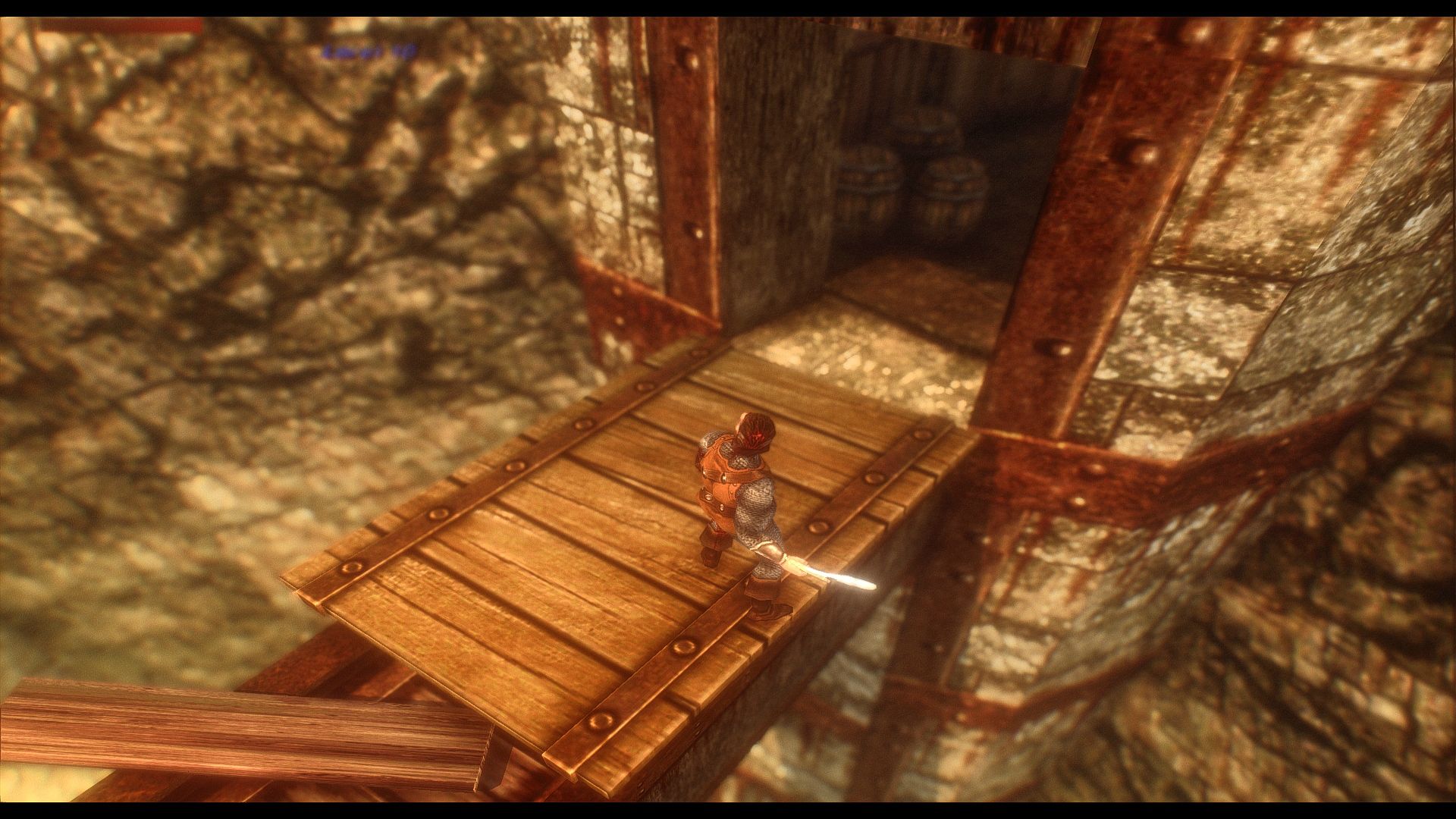 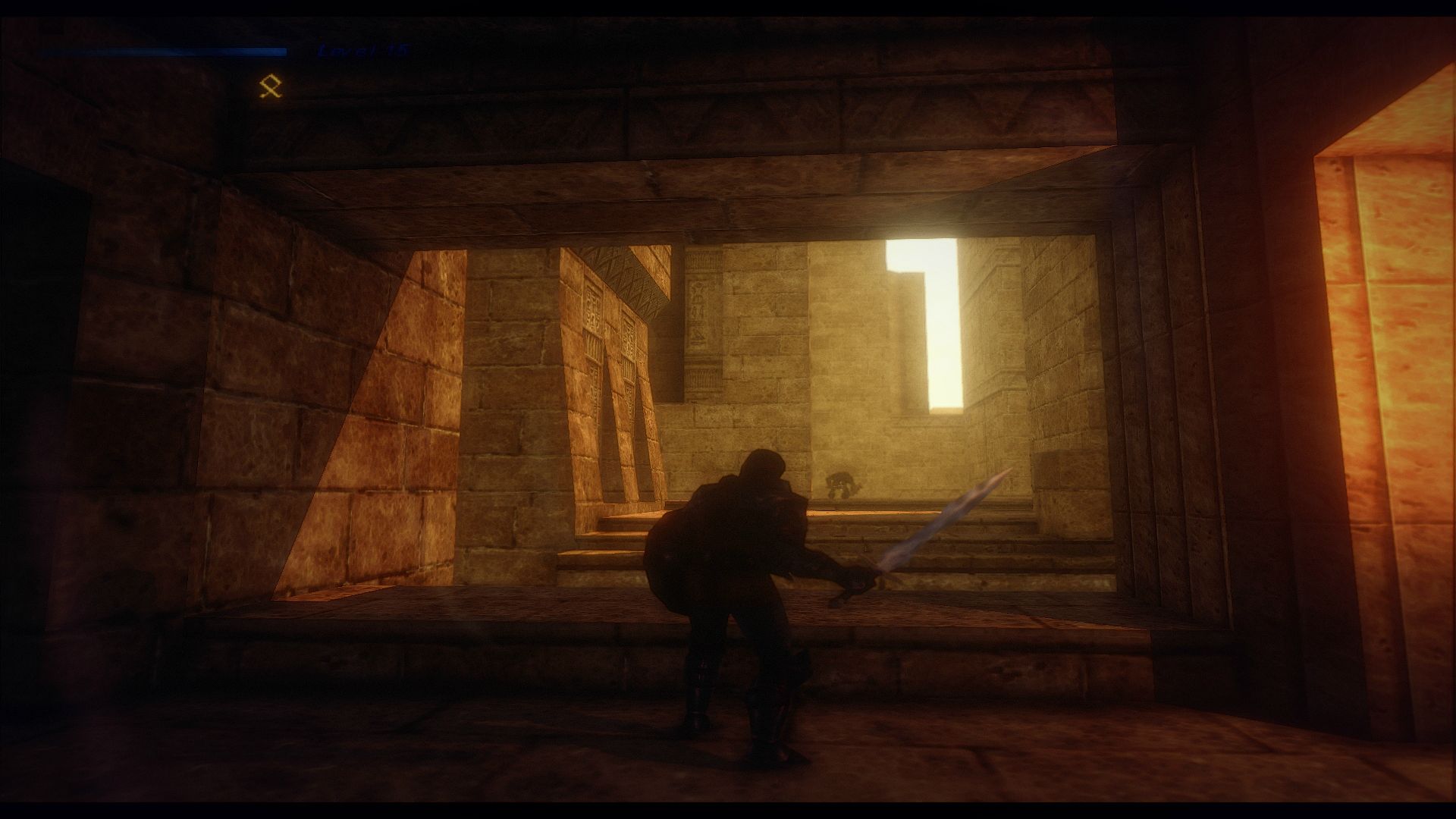 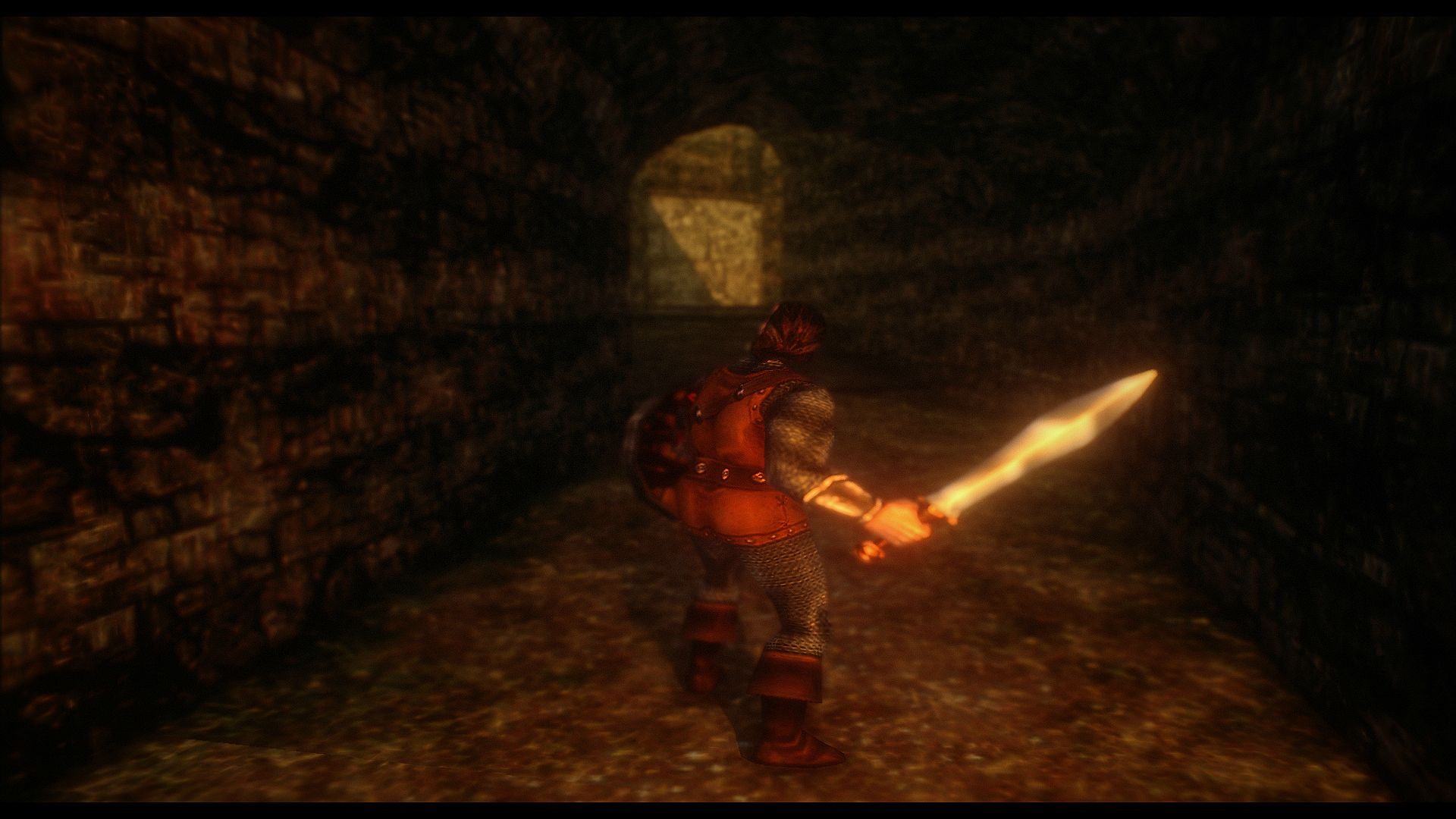 This MOD has pixel shader code and assets borrowed from: Boris Vorontsov Matso gp65cj04 Ceejay Kyokushinoyama Unreal Warfare Prospero IndigoNeko IronLord and maybe others I guess... Thanks all.

I hope you guys have a look and I'll love to hear feedback about it. Colors, lighting, playability, bugs, ideas, etc.
I have a couple of ideas for future versions. I'll see if there's interest in this one first.

--UPDATE--: Boris at (http://www.enbdev.com) has released a new version specially for BLADE. That's great news. Basically means Blade now is capable of HDR postprocessing, DOF, SSAO, SSIL, BLOOM, and more O_O
Please go there and thank him for that (or donate even better)

When looking for a quick way to improve Blade graphics I found out that an old 0.158 version of ENB (http://www.enbdev.com) partially worked on BOD. most probably the best game ever made in Spain, and possibly one of the best computer games ever made anywhere

Perfect mechanics and great visuals just need a minor update. BOD lighting was so advanced and fighting mechanics so tightly conceived that it becomes a current game with just adding some of the superficial graphic enhancements that have become standard for today generation.
The ENB 0.158 was designed originally for GTA SanAndreas, so it has many problems on Blade. Mainly it only works when a light source(sun, flame) its on screen. To try to keep ENB on most of the time I created a MOD that links a light to the character. Works good enough

For ENB to work youl'll also need the gog.com version of the game or run it with nglide (http://www.nglide.com)


Blade of Light Mod
Use color correction and image postprocessing techniques to create a new cinematic look for the game. Now the light and darkness behaves more naturally, but still with an stylized look. Not aiming for realism. Just for increased appeal. Enhance the already amazing lighting of the game. Now most of the interior areas are really dark. Is very hard to find your way in the darkness so all weapons now can cast a light. Similar to carrying torches or having one of those orc sensing blades the hobbits had. You can turn the weapon light on or off. That creates spectacular fights in the darkness with all the shadows dancing over the environment.

Still testing and playing with it all. If there's interest I'll try to put it all together in MOD. I'll keep posting updates and images.

If only we could get soft shadows on Blade of Darkness...

It's funny I never thought about Messing with the shadows. They look exceptionally good to me the way they are. 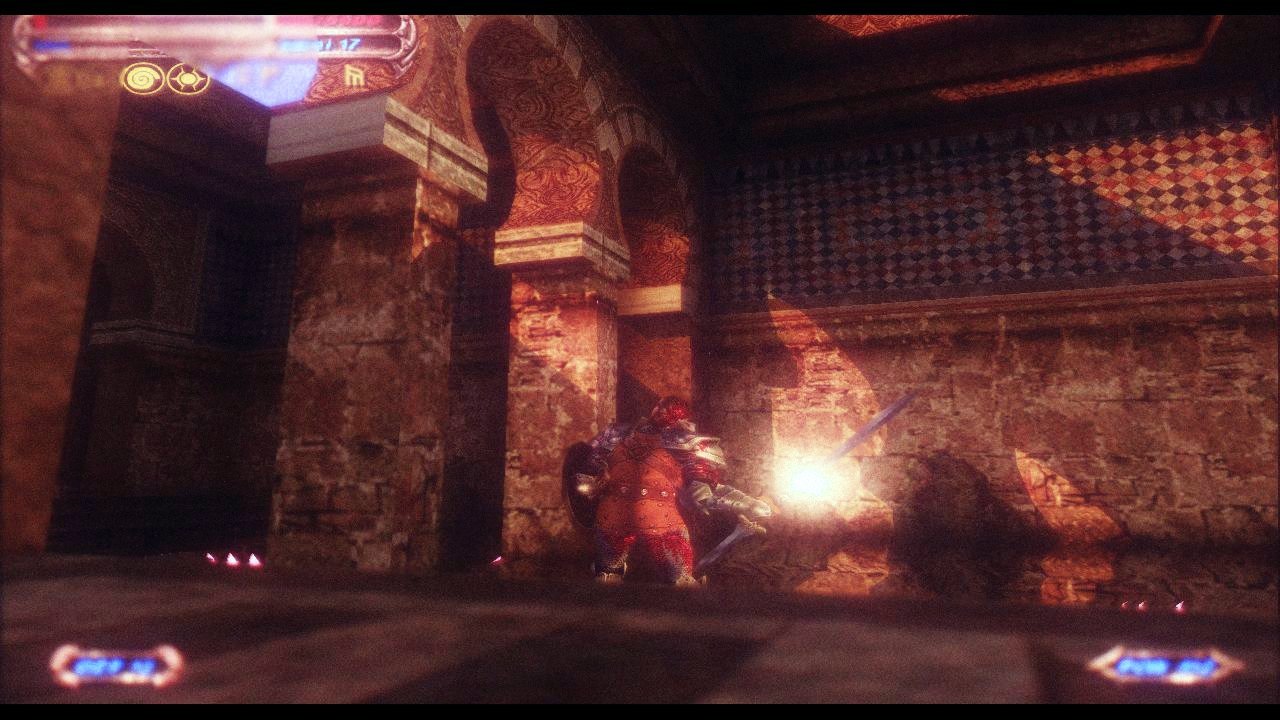 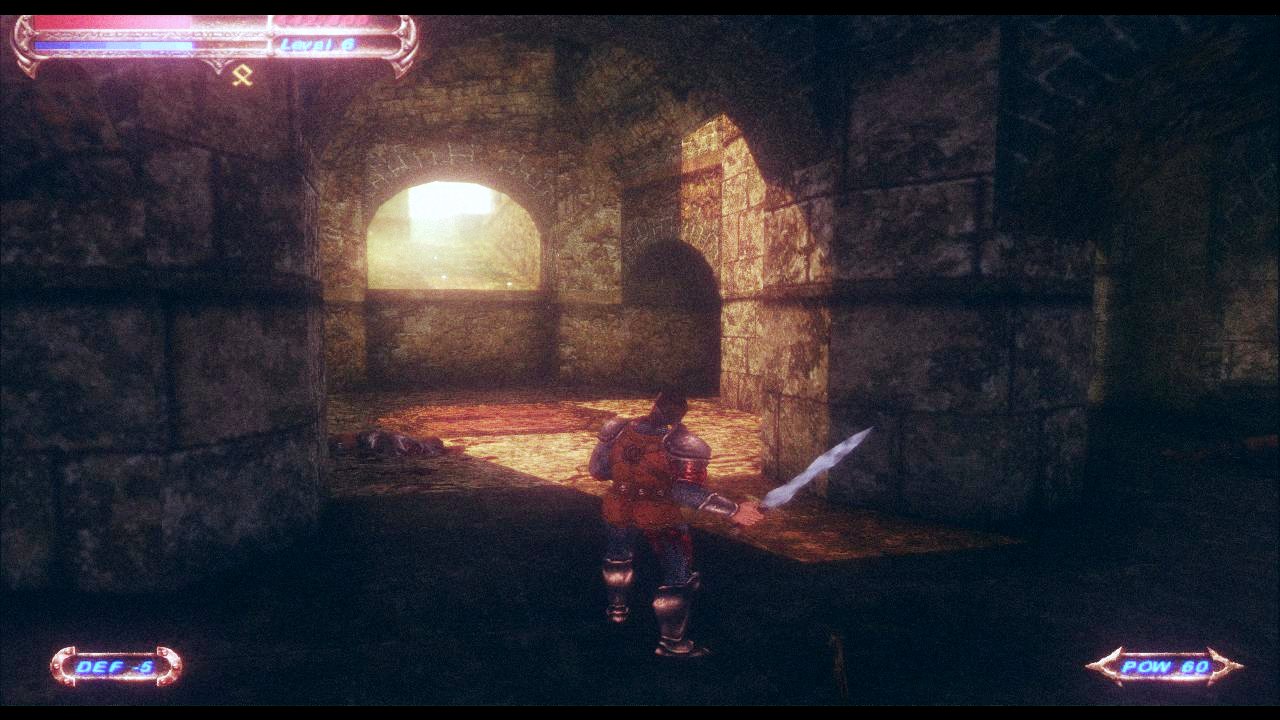 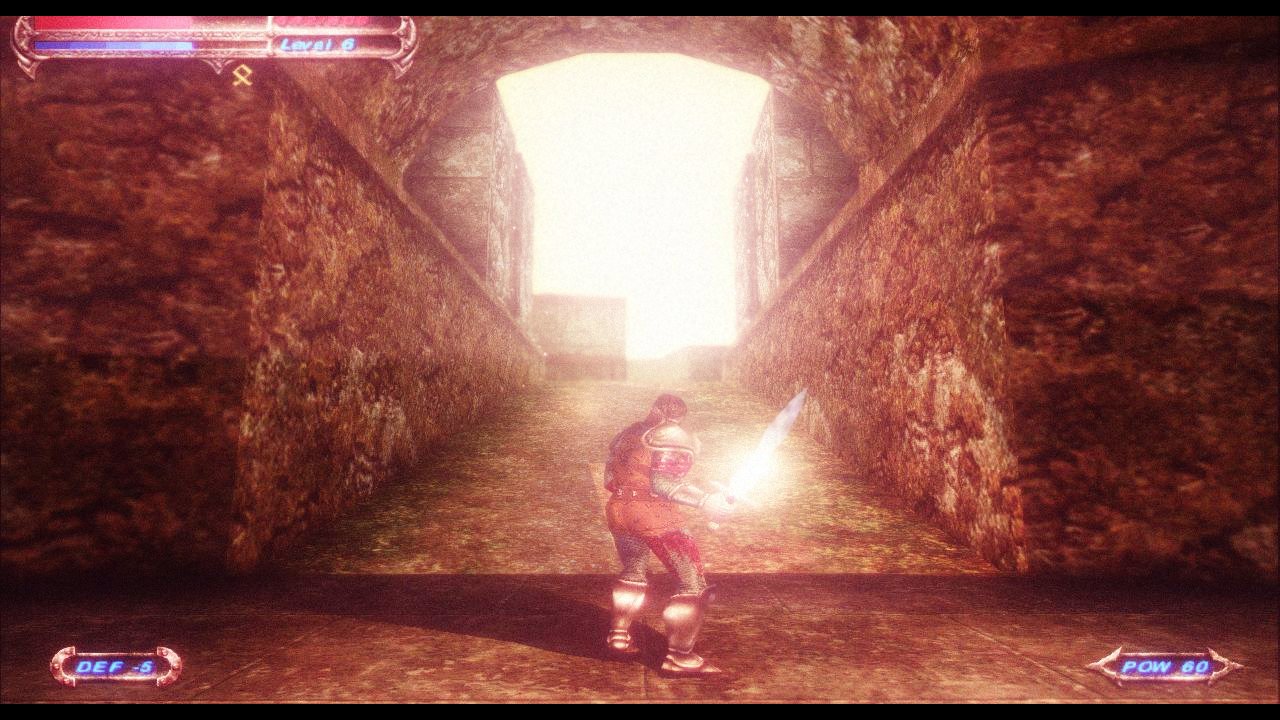 This looks really interesting. I was messing about with my enb in Skyrim the other day and thought it would be great to get some of those features in Severance.

I'll look forward to a mod version so keep up the good work...

Just out of interest...what resolution are you running?

Anyway good luck with this and i look forward to playing it.

Are the images processed through instagram or are you actually using ENB?

That all looks very promising.

How does it behave in regards performance? One critical thing with the BOD engine is that the shadows are calculated dynamically as the sunlight passes though each sector. The more sectors it passes though, the more CPU power needed. The original RAS maps are very nicely built to avoid big slowdowns. Lots of little tricks that most folks wouldn't notice. For instance, there are walls blocking off long views and sunlit stairways all have each step sloped so there is just one big sector on top rather than a lot reaching to the 'sky'. Arches are particularly tricky when casting shadows.

In a lot of the maps I have built lately I have even dispensed with external light in preference to using more characters in view. Check the Dwarf Wars mod. There is an option of sunny or foggy. With foggy you can have maybe 20+ chars in a fight fairly comfortably. With sunny it lags badly.

Like the idea of self-lighted weapons. I gave the Wizard character night vision for just this reason.
My BOD site: http://www.petrbnsfineart.com/bladestuf ... stuff.html
Top

Thanks mate, can't wait to start playing around with this.

However i hope you do release some cool presets to get us started.

As for performance, surely todays gtx780s can handle most of this eye candy. I mean i use a heavy set enb for skyrim and it still plays well.

Anyway thanks again for this and i look forward to more developments.

Oh and Boris has been thanked...

Actually performance is pretty bad, granted i haven't played around with it too much yet....but hopefully it can be improved.

Also is dof working properly? I noticed it's working in one of your screen shots but i can't seem to get it running.

Prospero,
thanks for dropping by. I've been working on BOD modding for a few weeks only but it's been enough to realize that you are quite an institution. Your tutorials and posts were a trusty blade to cut through my ignorance on the matter

To respond to both you and sfb regarding the performance concerns, I have to say that the whole thing is a bit clunky. I'm not an expert on the tech side of things so bare with me with the simplistic or inaccurate explanations. Please keep in mind that we are running a game originally designed for dx7 (which doesn't work anymore) . So we are using the game own dx7 to Glide raster, but as we don't have a glide card we use a glide to dx9 wrapper (nglide) on top. Then we place ENB between DX9 and the graphics card so we have access to the game rendered frames and few other things like the depth buffer. Then the pixel shaders are applied to the render to add extra effects. It's surprising that any of this works. But it does. And, despite some limitations and trade-backs, it works very well.

So Prospero, in a nutshell there's no modification to the core of the game an how it handles it's shadows or maps. We are just intercepting the final rendered images and modifying them. Modern cards do that well, but obviously there's always a limit. Every new effect or pass takes a toll on speed.

The good news is that after a week of tinkering with the pixel shader code that's out there (Mainly from Boris at ENB, and few others) I got a stripped down version that is playable and still has all the good stuff in it. So I'm playing at 1280x720 on a Geforce460M (laptop) with SSAO, SSIL, BLOOM, DOF, LENS FLARES and a bunch of color correction and lesser effects like noise, vignette, etc.
The main thing is I want a final setup that's playable, visually striking and requires no tinkering with settings to play the game start to finish. Once is out anyone can use it and modify it to own taste, but I'll like it to be ready to go from the start if you just want to play. Sort of a Blade v1.5

Right now I'm happy with performance. trying to sort the visual part. Extreme changes in lighting may cause playability problems. Some of my skies are blowing out to blinding levels. Some maps look amazing, but I have to test them all briefly to make sure things don't break (blinding fog, pitch black darkness, too many flares...)
I was happy with my setup for the old ENB_0.158 version. It was more "graphic novel" style. but now the ENB_0.242 it's a different system so It brings different posibilities.
I'm close to be done with it. A couple of days maybe. See if I can get you guys playing Blade on New Years Eve instead of getting drunk. Or maybe both

Sfb, It's great that you are playing with BOD ENB. Here's a tip for you. Blood doesn't go well with SSAO

I had to turn off blood on the game options as it was completely killing performance. See if that helps. And regarding the DOF I had to combine some code from boris with some of the skyrim DOF shaders to make it work. You'll have a look at it soon. 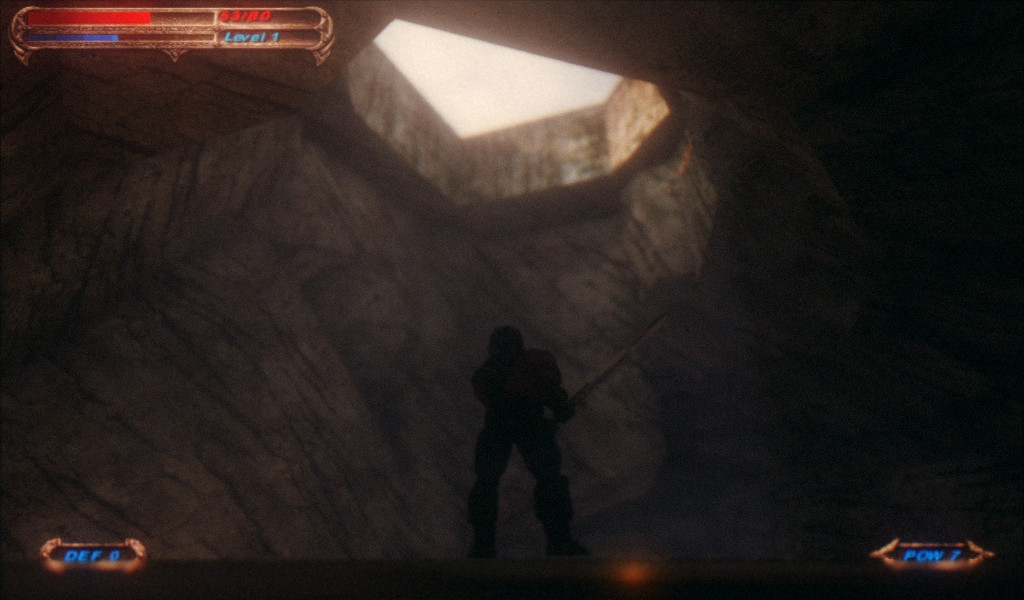 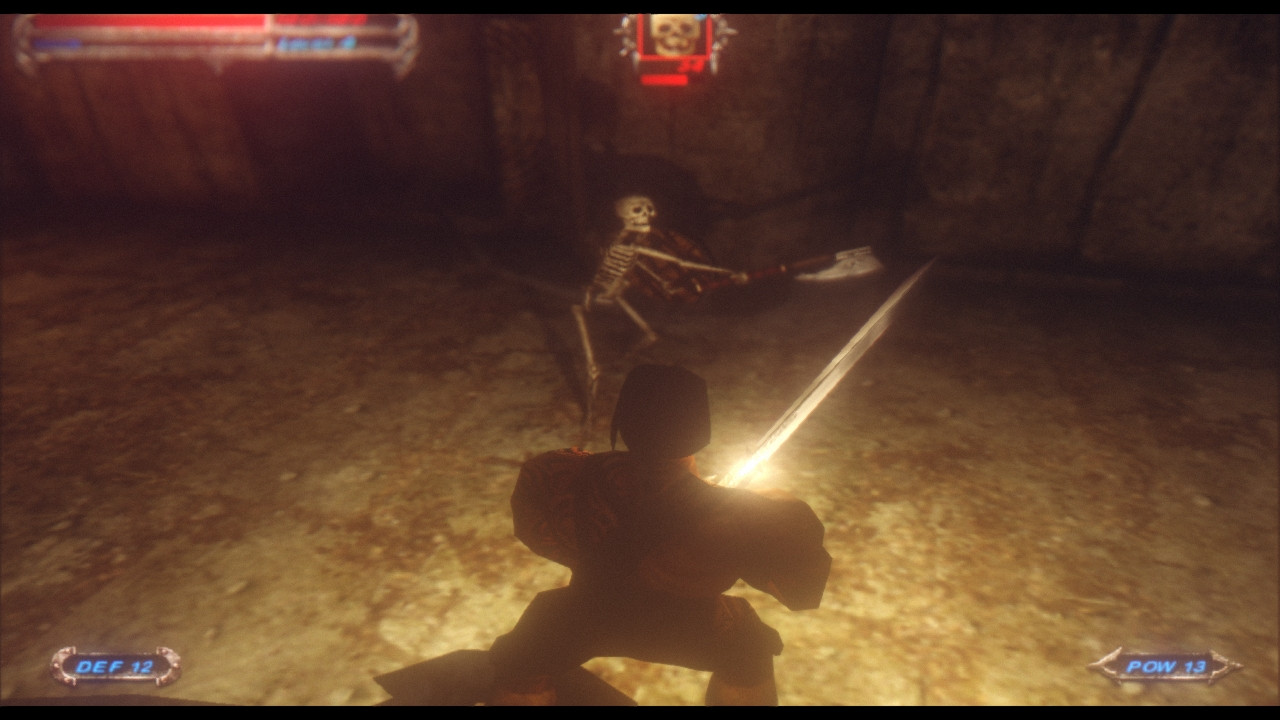 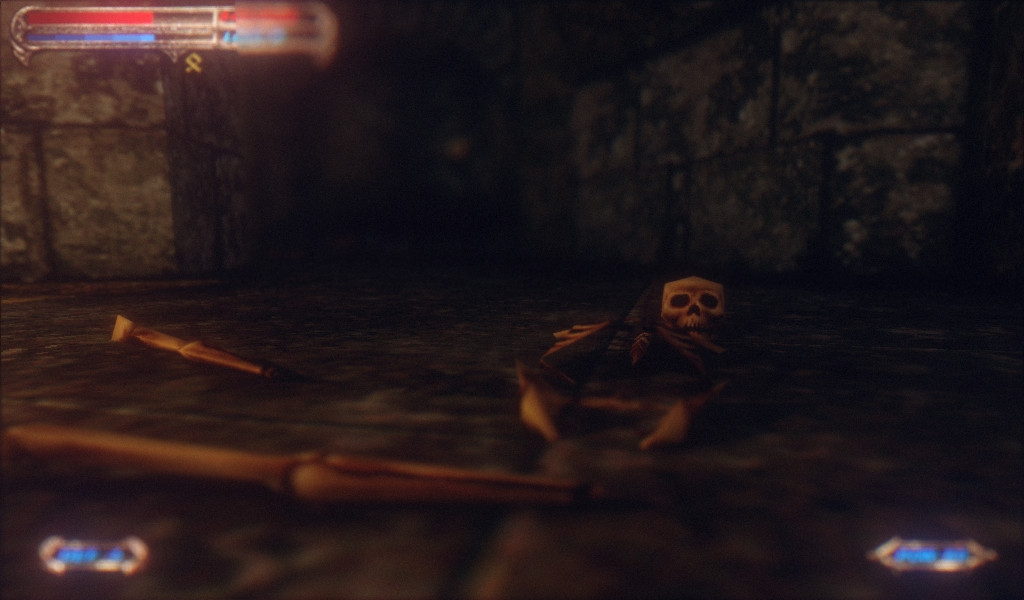 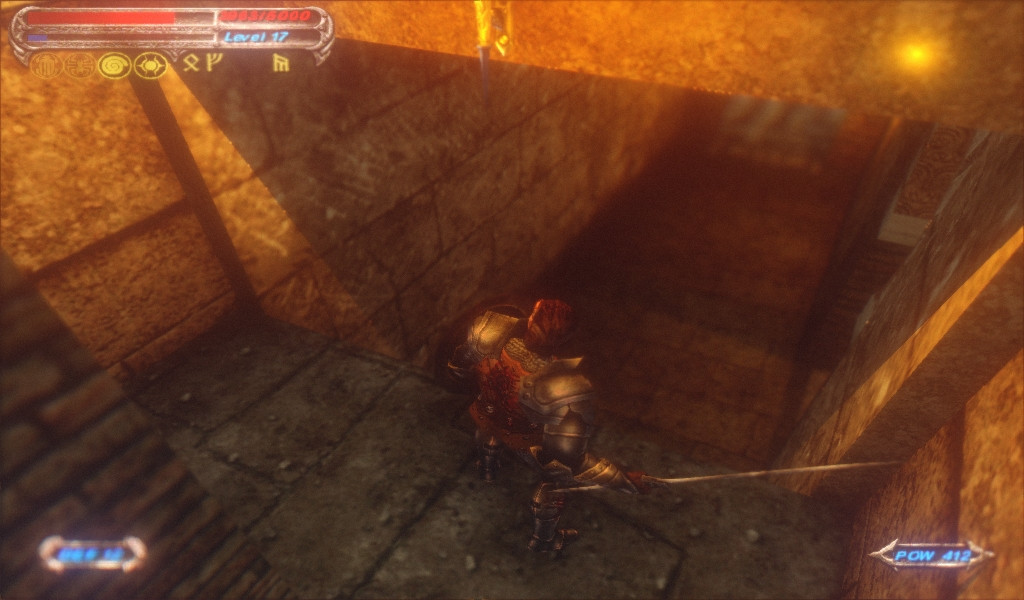 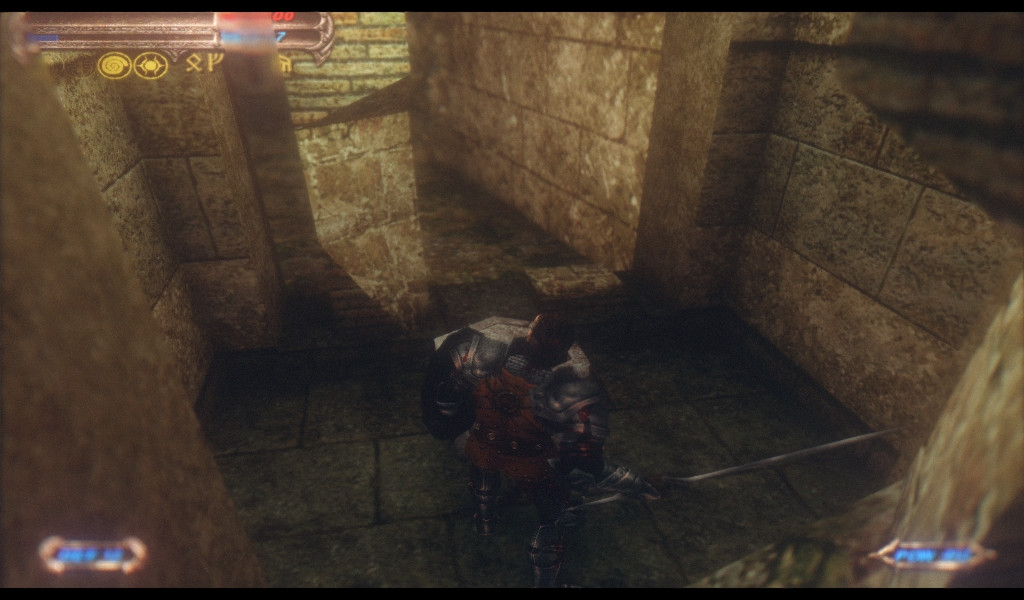 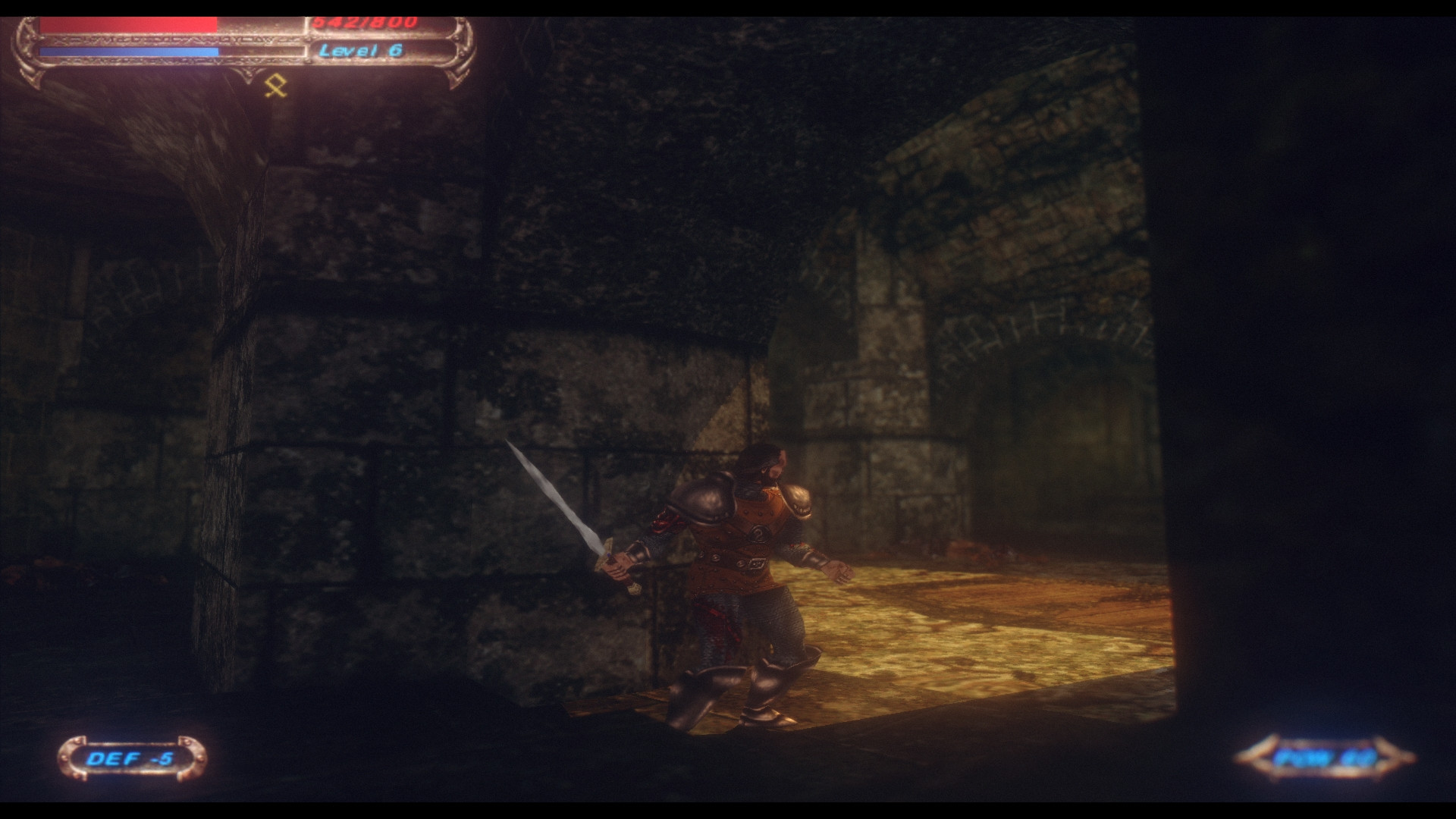 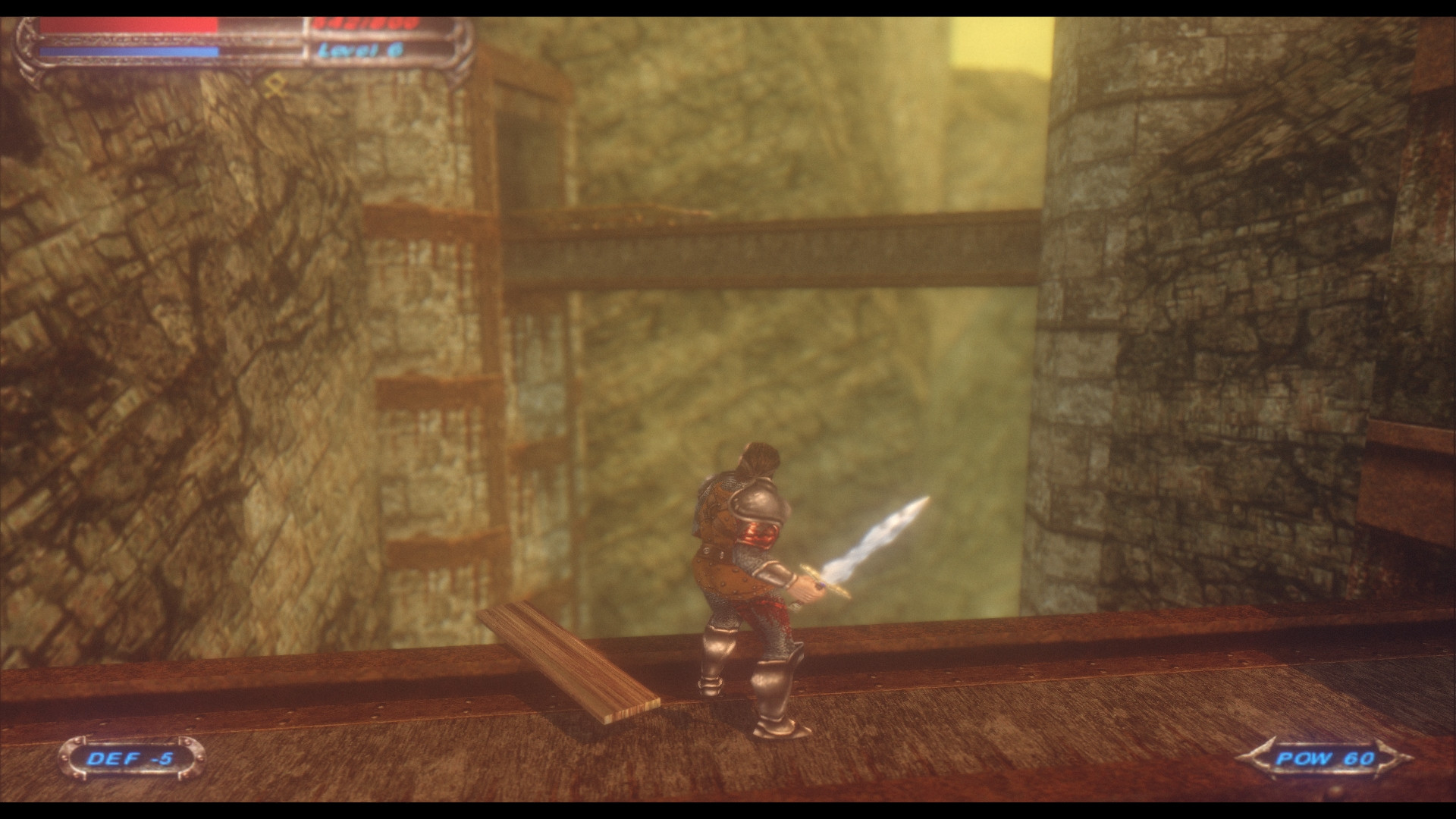 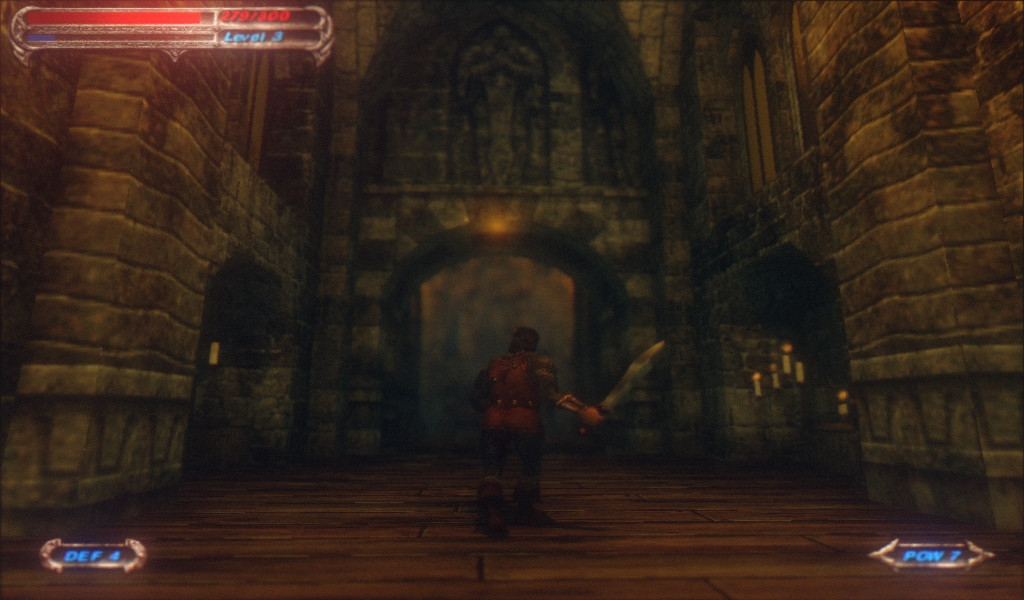 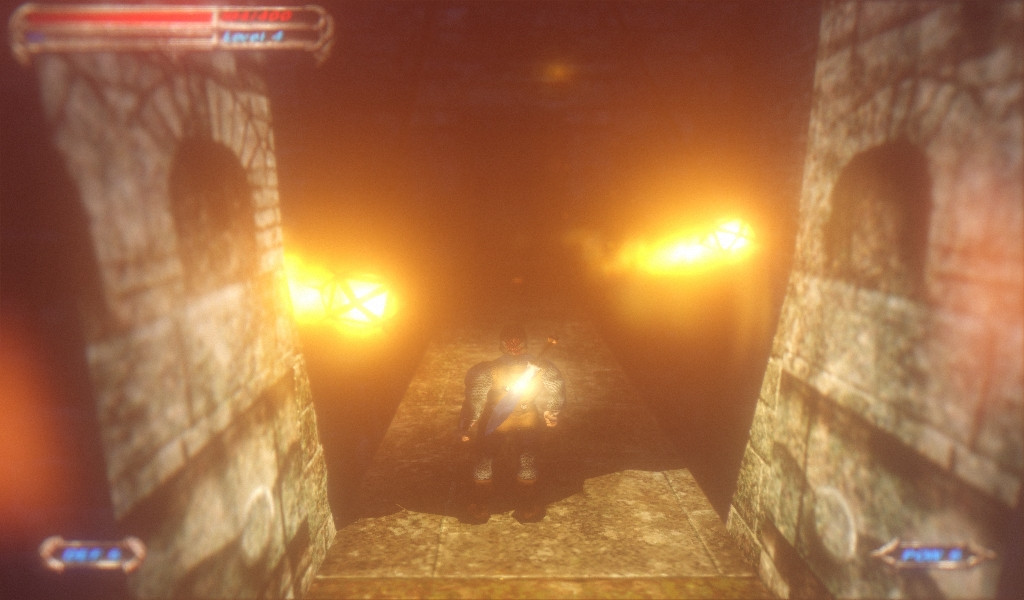 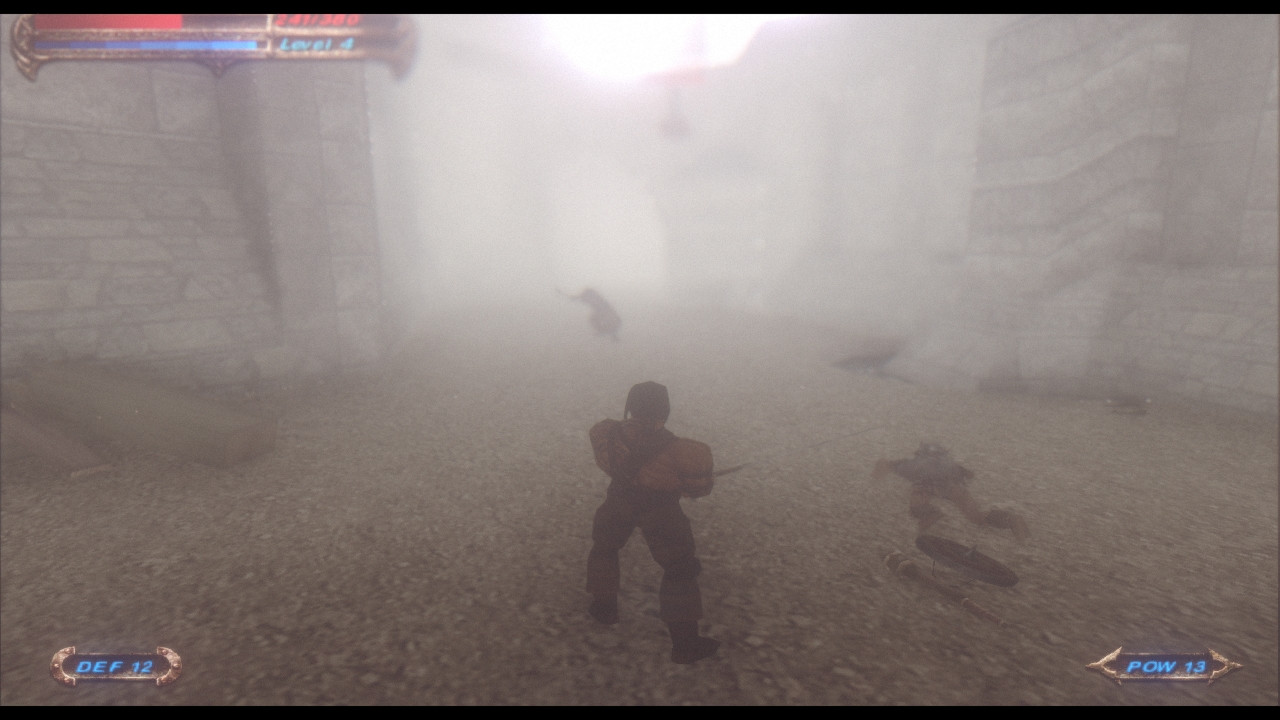 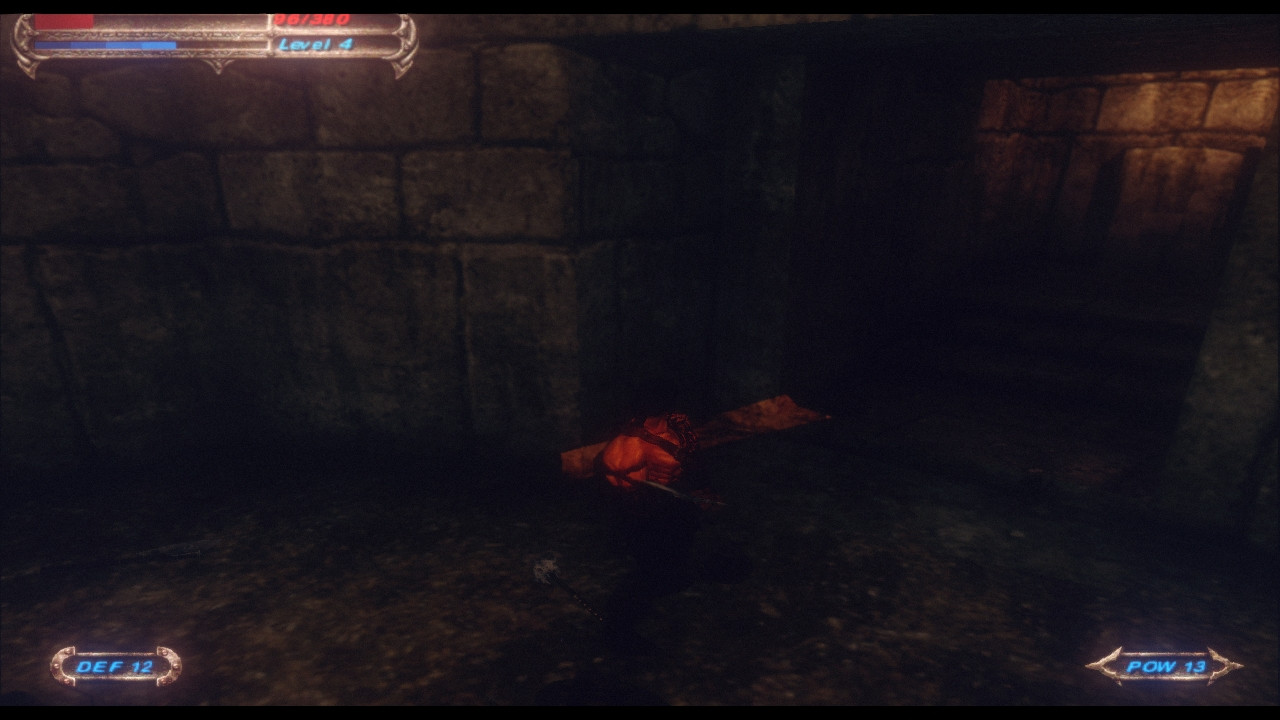 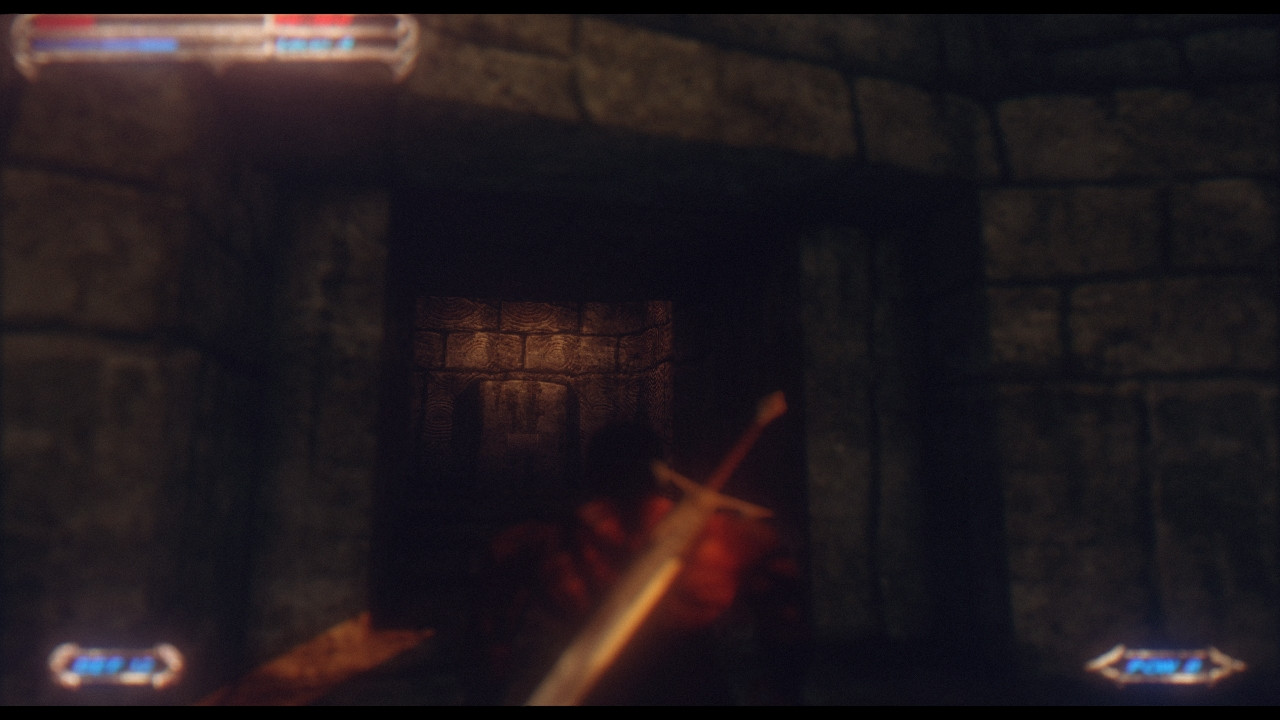 Prospero,
I modified actions.py so when a character takes a weapon (from the ground) it calls my script for turning weapons light on and off and registers the keystroke commands.
This way I always have to pick a weapon (or drop it and pick it again) at the beginning of the level to execute it.
Is there a better way to include custom commands at level start?
Top
Post Reply
121 posts